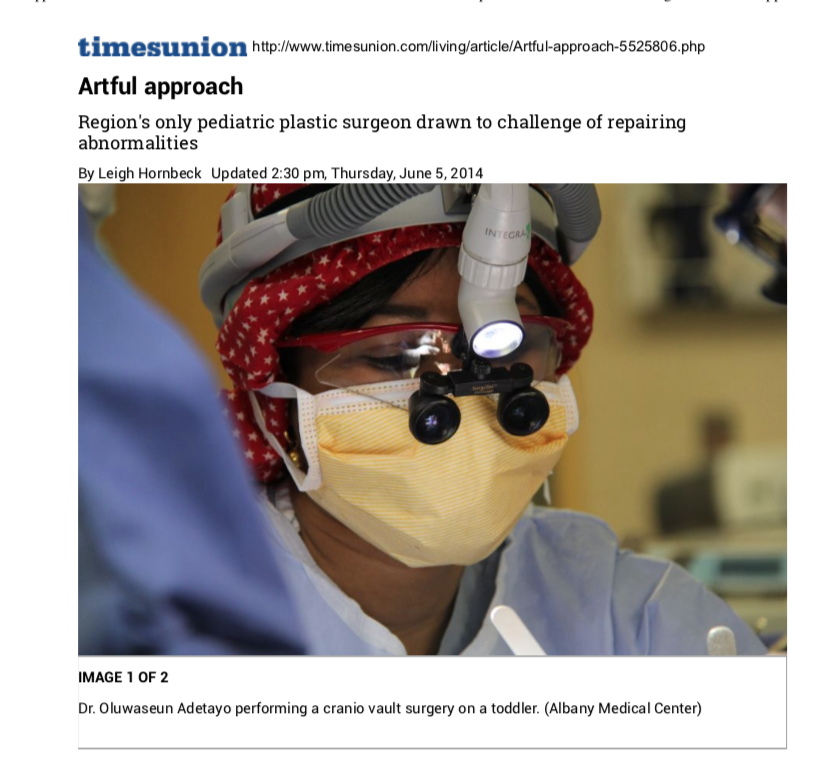 Dr. Oluwaseun Adetayo is the region’s only pediatric plastic surgeon with highly specialized training in treating cleft and craniofacial abnormalities in children. Born and raised in Nigeria, she emigrated to the United States to complete her education. Albany Medical Center is her first appointment; she joined the staff in September.

Q: How did you choose medicine and this specialty?

A: Plastic surgery found me. I was always interested in medicine as a child. When my family traveled I always asked for them to bring me back encyclopedias, syringes and things like that. They thought it was interesting but they indulged me. In high school I had a friend who had sickle cell disease and died. It was hard to feel helpless, and this made medicine intrigue me even more. I was in my third year of medical school before I was exposed to plastic surgery. I liked the challenge. I liked restoring form and function. It is a kind of reverse engineering to know what you want to achieve and then use your skills to figure out how to do it. I liked working with children and adults, when I put it all together it led me to this.

Q: What are cleft palate and cranial abnormalities?

A: The face begins development as two halves, which slowly grow together and meet in the midline. A cleft is formed if the two sides don’t join completely, leaving a gap in several areas such as the upper lip, base of the nose, palate which is the

roof of the mouth, or other areas of the skull and face. Cranial abnormalities happen when the sutures between the plates of the skull fuse too quickly. As the brain grows, if it can’t go in one direction it will go in another, and the skull is deformed. A baby’s head is malleable and most of the sutures in the skull aren’t supposed to completely fuse until at least the third decade of life.

Q: What has been your most rewarding surgery?

A: I had a patient who had a front nasal encephalocele — the bones of his skull and face didn’t close properly and a bulge containing brain matter had pushed through the opening. It pushed his eyes apart and eroded the structures of his nose. I worked with a our pediatric neurosurgeon during the surgery to to repair the brain matter, then rebuild the skull and facial bones of the orbit and the nose. I borrowed bone from the skull, divided it in two, put a piece back into the skull and used the other to reconstruct the nose. There is an art to this type of surgery — the goal is to restore function, but you want to respect form too, and think about what will look good. Instead of leaving a scar down the center of his nose, I hid them on the sides. When I do cranial surgeries I close with a Z incision that will be hidden better by hair than a straight incision.

Q: Have you traveled to other countries to do surgery?

A: I’ve been to Cuba, Haiti, Nigeria and Peru. Many times in developing countries where there is no medical care, a child may undergo only one surgery to fix their cleft lip, which fixes their appearance. They can go on to lead a relatively normal life. But it’s far more complex than that. A child born with a cleft lip and palate will need further surgeries, dental work, and orthodontia, and often jaw surgery and rhinoplasty.

Q: What are your goals at the hospital?

A: I’m excited that people who used to have to travel to New York, Boston, and other further areas can now be treated locally. I’m working on establishing a multispecialty team here to address and deliver the specialized care that these patients need and deserve.

Q: What do you think of Albany?

A: I understand this was a brutal winter. Now that I survived that winter, I’m looking forward to exploring more of the area. I’m taking suggestions.

AS SEEN IN: Times Union